John Anywan is one of the elders of CC Tonj, he has been leading Bible studies since 2016. John lives with his wife of many years, has grown children and 6 grandchildren. John will be discipling new memberes of new church plants in the surounding villages so we can raise leaders from within these churches to lead God’s work within their churches. He will be among a team of pastors that will do the task in the 7 churches around Tonj.

John is a native of Tonj, but moved to Khartoum in the north at the beginning of the 20 year civil war in Sudan. He was also blessed by being allowed to study in Khartoum and live there and not serve in the military. He complete his teaching diploma there in Khartoum.

John says he started attending a Presbyterian church in Khartoum, “20 or 30 years ago, I don’t remember.” He says he called himself a Christian from then on, but “I never knew Jesus as a savior in my heart,” until he came to CC Tonj in 2016. At that time, he decided to come to a service, mainly because there was no Presbyterian church in Tonj. He says that very soon after he began attending CC Tonj, “Jesus bagan speaking to me in my heart.” By that time he was already deeply impressed that CC presented an image of God that is real and living Person, actively involved in the world and the lives of His children. It was very shortly afterward that Jesus began speaking to him personally.  John started to show his commitment in the area of prayer meeting and bible study till he became one of the elders of the church, he bring to the table his experience and wisdom. John is married and his wife work in the IDAT Hospital.

One of the Key role John Anywan will play is teaching basic faith doctorine to our church plants leaders in the villages surounding Tonj and make disciples in these village churches. There are four old churches and  3 new churches just started this year, the need is teaching the basic doctorine of faith to core members and leaders of these churches and raising discipples who can be trained as  pastors for these churches John Anywan will be one of the pastors that will excute that task. 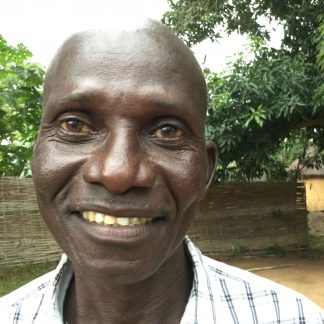